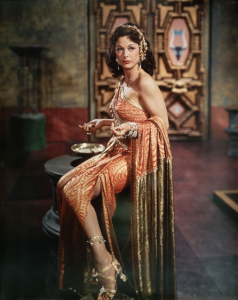 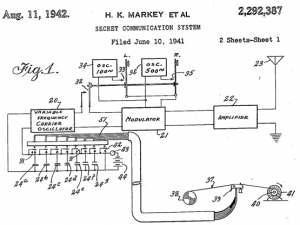 More than just a pretty face, Hedy Lamar was the sensuous mistress of MGM’s “Golden Age” during the early days of Hollywood. But her career as a pin-up model and film actress often overshadows her greatest achievement: inventing a radio signaling device for the military to help defeat the Nazis. This “Secret Communications System” as it became known was useful in the war, but the far-reaching impact wasn’t fully understood until decades later when it became the earliest communication prototype for military technology and early cell phones.

Born in Vienna in 1913, Hedwig Eva Maria Kiesler – Hedy Lamar – began acting in her late teens. She became an international sensation in 1933 when she was “discovered” by an Austrian director for her role in a steamy Czech movie called Ecstasy (1932). After her unhappy marriage to first husband Fritz Mandl – an Austrian munitions manufacturer who, it turned out, sold arms to the Nazis – she moved to America and capitalized on her success in the Czech and German film industries to sign with MGM, one of the biggest studios of the day and the only company to produce a movie eligible for Best Picture every year for two decades.

Her first Hollywood film, Algiers (1938), cemented her popularity with American audiences and led to her getting role after role alongside other Hollywood Golden Age actors like Clark Gable, Spencer Tracey, Charles Boyer, and Jimmy Stewart. But it was her incredible off-screen talents and intelligence that earned her a place in celebrated women’s history.

Lamar and her friend and composer George Antheil worked together to create and patent their “Secret Communications System.” Their system featured a simultaneous radio frequency broadcast that relied on the invention of the downsized transistor, or an amplifying semiconductor device. originally meant to prevent US military enemies from blocking the signals of radio-controlled missiles. Initially deemed impossible by most military and scientific officials, the idea of proved incredibly useful once Lamar and Antheil got it working and even more so after the war as it became the basis for most mobile phone technology as the multi-frequency audio broadcasting was used in many early cell phone designs.

Both Antheil and Lamar received the patent for their invention in 1942 and later, in 1997, were honored with the Electronic Frontier Foundation Pioneer Award. Also in 1997, Lamar received the BULBIE Gnass Spirit of Achievement Award, equivalent to an Oscar in the field of technological advancement and invention.

After a long and eventful life, Lamar died in 2000 in her Florida home at the age of 87. While we can remember her one of Hollywood’s most beautiful and talented actresses, we shouldn’t forget her incredible contribution to 1940s war effort and to the technology that powers our phones today.