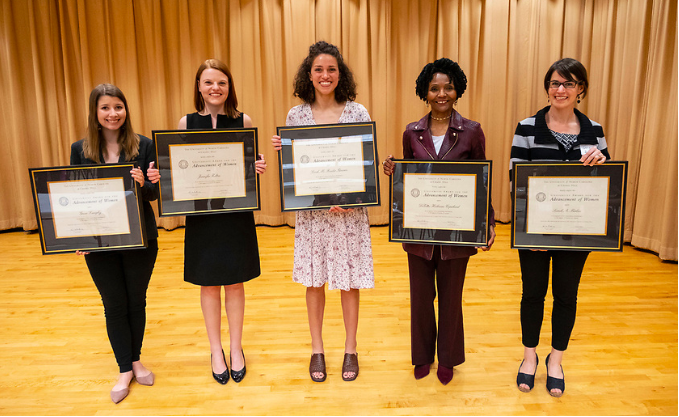 University Awards for the Advancement of Women

The University of North Carolina at Chapel Hill presented the four University Awards for the Advancement of Women for 2021.

This year, four individuals– one faculty member, one staff member, one undergraduate, and one graduate/professional student or postdoctoral scholar–were selected to receive these awards. The faculty and staff recipients each received $5000. Each undergraduate student award and graduate/professional student/postdoctoral scholar award was $2500. Awardees were honored in a ceremony on Monday, March 8th, 2021.

The Carolina Women’s Center Women’s Advocacy Award was initiated in 2001 and initially recognized faculty and staff at the University of North Carolina at Chapel Hill who made a substantial contribution to the climate for gender equity on campus as a result of their leadership in advocating for women. Additional award categories were added in 2010, and awards are currently given in three categories: faculty/staff, postdoctoral scholars/professional and graduate students, and undergraduate students. All members of the campus community are eligible for nomination, regardless of gender, gender identity, or gender expression.